I've been absent on this for a bit, not slowing down progress, though.
I've been through a lot of projects since last post, might do some posts about them.
Projects include:
> wire-wrapped z80 machine -working, very basically.
> 8051 board, modifying a small trainer i bought.
> Restoring a 1990's laptop for use as a serial terminal.
> Designing an 8085 board with a million 82xx chips

I've gotten some new test gear, too. Most notably a 70's vintage Philips logic probe and pulser - some of the greatest tools I've ever owned. 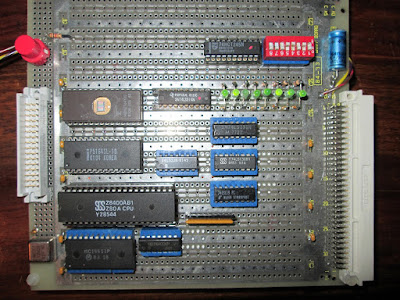 This is the z80 computer I'm currently working on.
Right now it features only dip switches as inputs, led's as outputs.
additional features will include a 8250 uart, 8255 PIO, and more!

That's it for now!

Think I might have something cool to bring forth (get it? forth?) soon.

I LIED! IT'S NOT ALL ABOUT COMPUTERS!! HERE COMES ANALOG SYNTHESIZERS!

So yeah. Am doing modular synthesizers now. Still will do computers once in a while, but NOT NOW!

Here's my synth so far. All modules homemade. To the eurorack std. 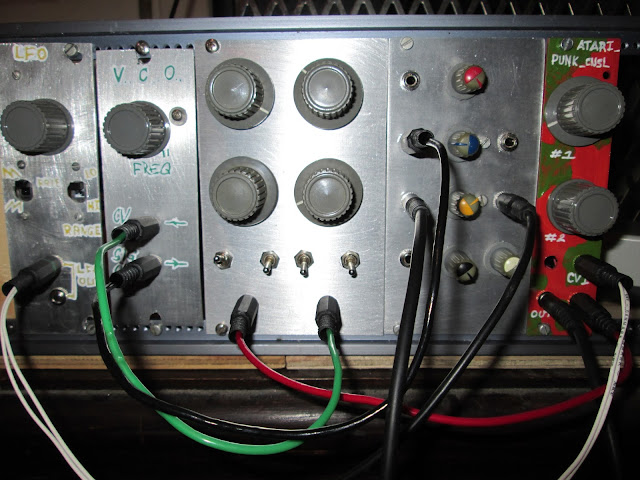 When burrowing though a big box of unsorted IC's, like Scrooge McDuck though his money bin, i came across a chip I'd never seen or heard of before: Zilog Z8671 (BASIC/DBUG). Upon reading the "Zilog Z8-something" part i got hyped because i assumed it was a Z80 support chip, like the standard 6800 support chips are all called 6850, 6821, etc. and 8080 chips are called 8212 and so on.

I was very very wrong, but that didn't diminish the hype. The Z8671 is a chip in Zilog's Z8 microcontroller series: one that has an internal mask ROM with tinybasic!

Later I found some information leading to a Steve Ciarcia's Circuit Cellar (a series in BYTE magazine) that spoke about this tiny MicroMint z8671 board (Micromint is still around, it seems). -Alas it was much later that i found an actual schematic for the system, and was able to start the work.

A similar circuit is shown in the Z8 handbook/application book, but it had certain oddities: it was meant for the z8671, but it still incorporated a 27128 EPROM, with no explanation as to what was to be put in it. (Also, at that time, i didn't have access to an EPROM-programmer, which i do now, and now consider the greatest and most vital tool in DIY computer electronics at all: EPROM PROGRAMMER: backup-ing vintage ROM's, writing your own rom's for systems; even setting EPROMs up as programmable logic!

Anyway, decided I wanted to do the machine with wirewrap: had all the ic sockets and a nice eurocard protoboard to build it on.
-Had little to no wirewrap wire, though. It arrives tomorrow, updates will follow, but so far: 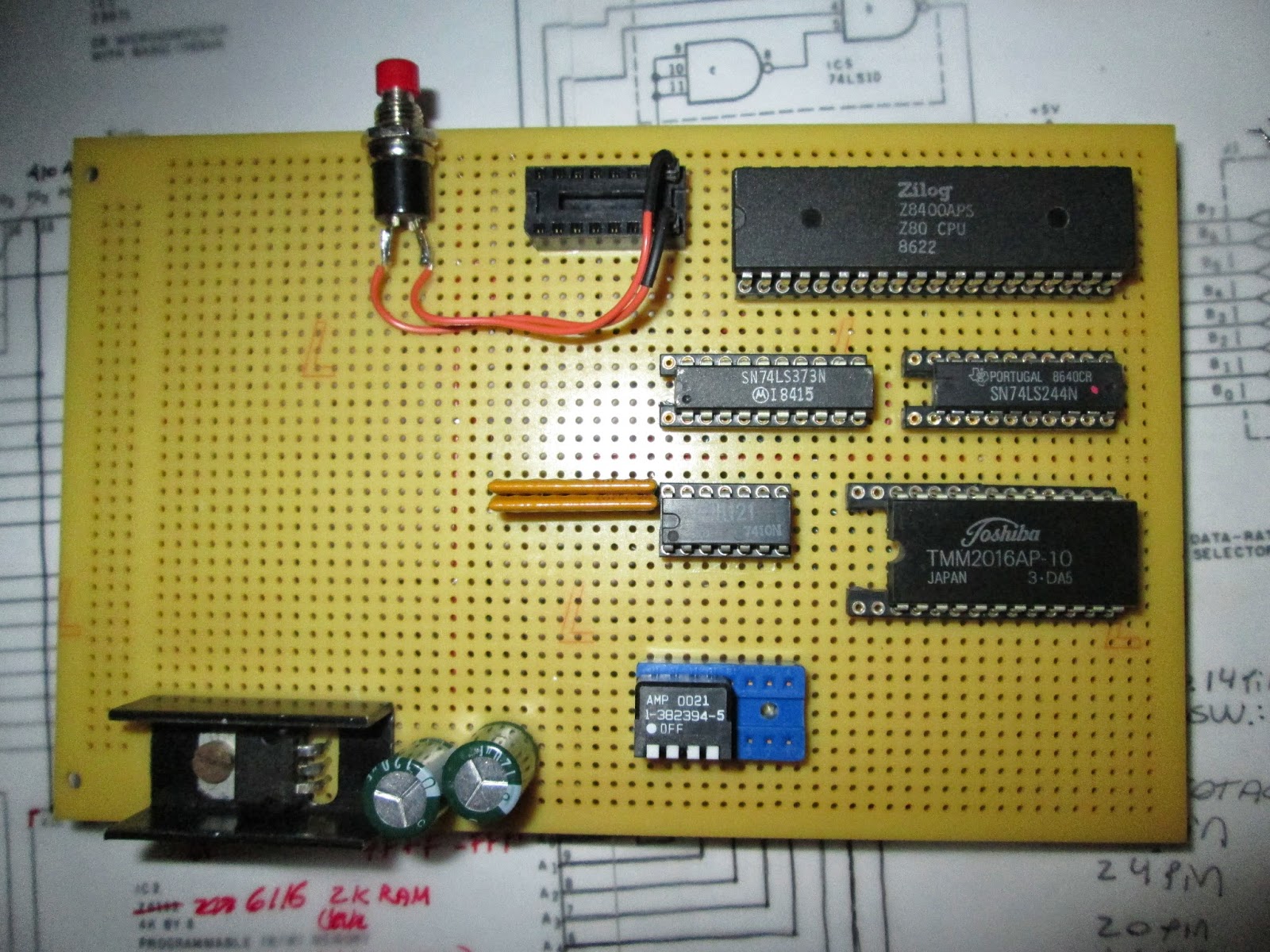 The Toshiba RAM is a placeholder IC, since I used two loose SIP wrap lists and needed to hold them in place: the same with the Z80 processor: I keep a box of dead or useless IC's for this kind of purpose, also to mock-up component layouts.

So It's been a while. Been doing some RF projects for ham radio the last months, and been a bit out of the loop with the microcomputers. Until my interest was sparked by a piece of test gear: 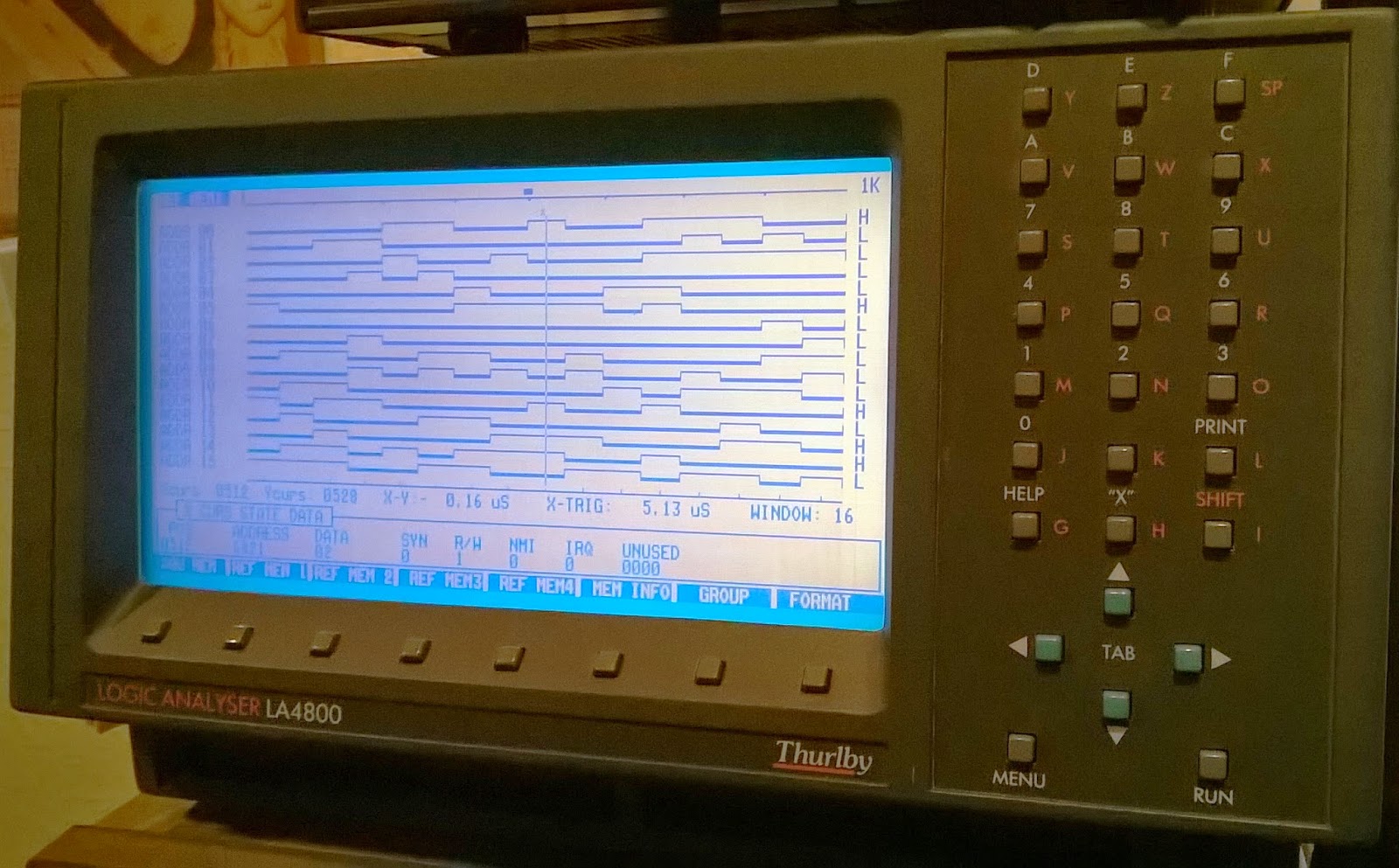 I got a logic analyzer! Thurlby (Tti) LA4800 48CH. logic analyzer!
It was fairly cheap, even though it lacks the probes. The thurlby analyzers uses these pods with IDC connectors, which basically just contains some input protection and some buffers. It says in the manual that you really just COULD connect wires directly to the input connectors, but there is NO input protection what so ever. they feed right into some standard 7400-logic buffers and some SIP resistors for pullup(down?), so if you feed it a smidgen more than 5V, you burn those (at best). Probes are coming along nicely, probably done by tomorrow (might make an update on them).

The interface is really nice, it's intuitive, took me ½ an hour without manual to get a basic understanding of it. It does both timing and state analysis, and also has an external clock input.

It comes with some nice sets of default settings; 8 bit computer
being one of the better. Pictured is some banks of test data it had.

The main board is almost entirely trough-hole, the only smd stuff being the LCD drivers on the module.

Most chips are 7400-series, with some nice big RAM for the datalogging. processor(s), yes, it has two, each associated with an eprom and some more ram; I'm suspecting one set is purely for the RS432 communications. Anyway, processors are Hitachi HD6303 processor.

The display has wonderful contrast, even contrast and brightness setting.

So, the z80 system 2 project being on hold until i get a functioning EPROM burner, I've moved forward on another project: The COSMAC ELF.
Though I've made some hardware mods, it is functionally equivalent of the original ELF. My mods include:

- Changing the HEX display to binary LED's; way cheaper.
This mod was actually suggested in the original article.

- Sprung for another layout, not wirewrap
Once again, I'm out of wrap wire, and I kinda wanted it to have more of a Altair 8800 / MIPS 8080 kinda look. 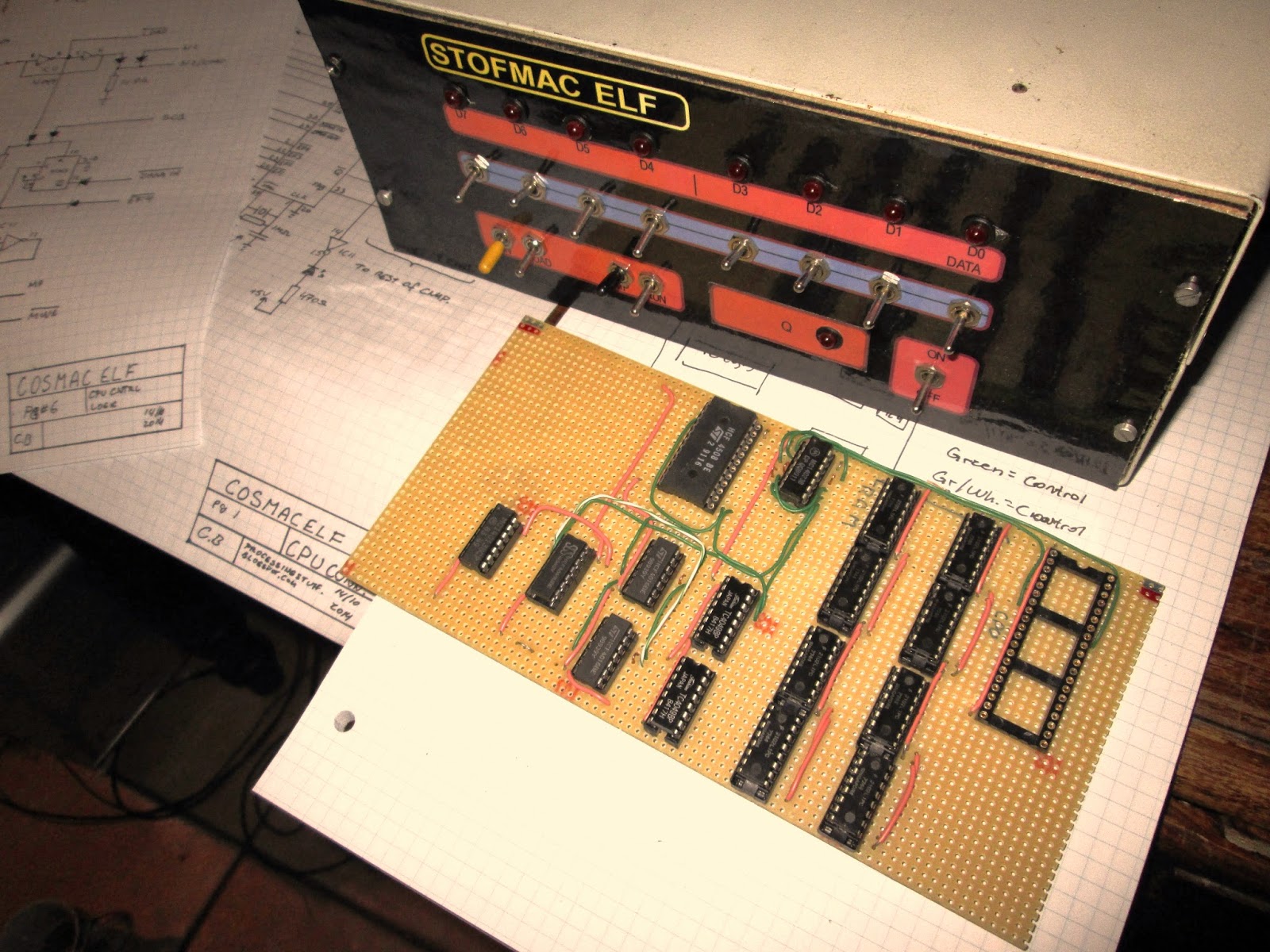 The 8 chips with dual round indents are the RAM.

I have redrawn the schematic into a more reader friendly form than the original, spreading it over 6 pages:
1) CPU and clock
2A) Original RAM
2B) My RAM
3) I/O logic
4) Display
5) Input
6) CPU control

Makes it much easier to debug and alter.

Anyway, so far, I've wired the processor control and power.
Buses are to come.

Diode matrix ROM for the Z80, or: How a silly, not-so optimized idea became a main design choice.

Ok, so the phase one hardware design for the z80 system B is almost done. Even started on expanding, but I would like to have it running first. But alas: having no EPROM's, and no burner for them, i had to think of something for a complete hardware test. So i decided to code three small program snips into a diode matrix ROM for it. 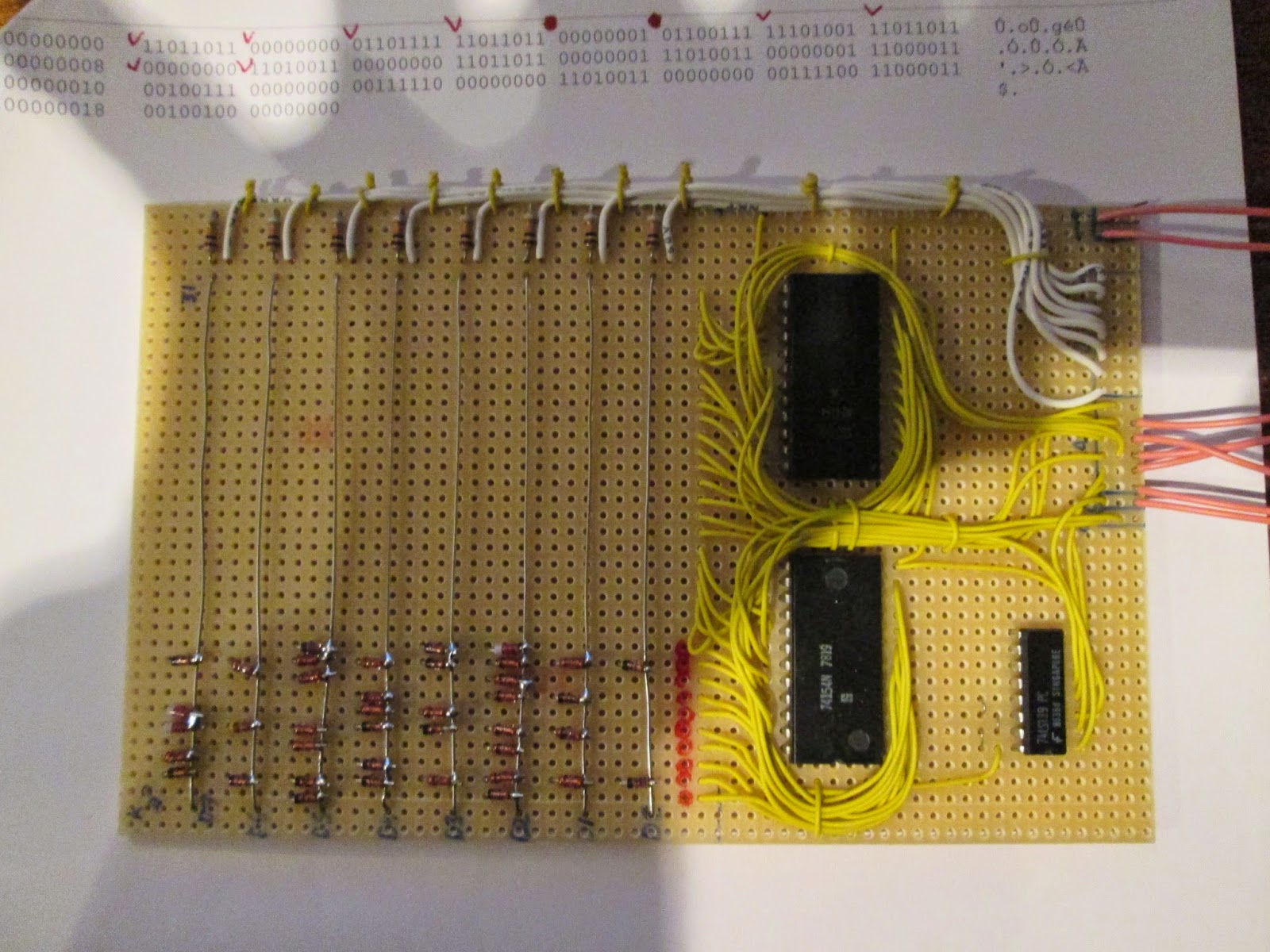 What a beauty! I've expanded the design (see last post) for 32 bytes, using 2 74154 4-16 decoders, and then feeding the lower 4 addresses into those. the next two addresses are fed to a 2-4 decoder, whose 1 and 2 output enables either chip 1 or 2.
The design of the diode matrix itself was a bit tricky. Most designs needs either multiple boards, or 3d arrays of wires, but eventually, i landed on having each trace (32 of them) for each line run all the length of the left half of the board. then, soldering tin/copper wire across the top of the board, and connecting those to the data lines, with pull ups. the result is rather neat, in its own right.
The bytes are read upwards, meaning that A0 is the lowest row, and so on. A diode indicates a 0, while a missing diode is 1. This is stupid, in terms of saving diodes, since 00 is used more often than FF, but yeah. Still needs some bytes, though, i ran out of diodes.

It should be able to mimic a 2716, or any device, really. I may need a tri-state buffer on DATA bus, and have the gate tied to /CS, to keep the bus floating from the pull ups. We'll see.

Once again, the sample programs are some counters and stuff i found on Donn Stewart's z80 page. I still haven't gotten around programming yet.
Indsendt af Stoff0r kl. 09.20 Ingen kommentarer:

So, I have run into the problem of needed programmed devices for my computer projects. A CPU cannot (mostly) start proper operation without some lines of code. Thus raising the problem: how to test your system without a ROM? Well, i was reading up on the 74154 IC. It's a 4 to 16 line decoder. So i got the idea, of making a diode prom with it, using four address lines, eight data lines, and dip switches with diodes. The solution looks like this: 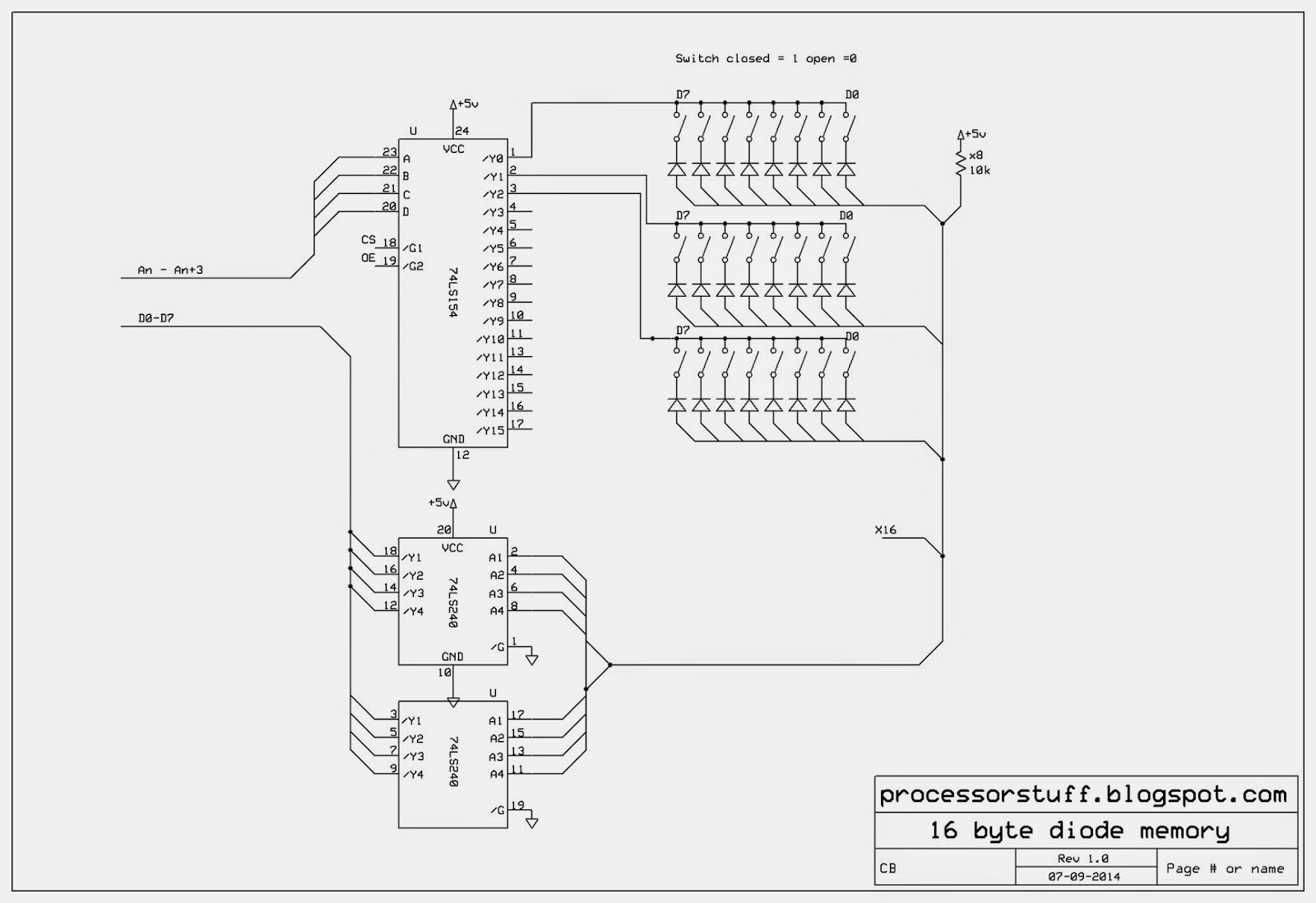 An address is entered on the An to An+3 (you can use whichever four addresses the system reads first, it varies with processor) and then, the two chip select and output enable (they're not called that on the 154, i've made the pinout compatible with the 2716), connected as well as the data lines, and then on the 16 x 8 dip switches, you can enter the programs or routines you want. 16 bytes seems infinitely small, but plenty of room for some test, and a HLT or so. a counter maybe. The 74ls240 is just an 8 bit inverting tru state buffer. You might need to connect the /G lines which disables output to /READ.

Note: This is kinda WIP, i haven't tested or even built this yet, so I'm just throwing it out here for the interested.